In 99 degree heat, melting in my shoes or not, today is the day I have to take my youngest son shopping. No choice, really; he and I work completely opposite hours. A day off together is a minor miracle.

In the car, I tried my best not to torture the boy with too much of ‘Mom’s Music’ on the radio. I only tuned in for a couple of songs: Where Or When by Dion & The Belmonts, and I Go To Pieces by Peter & Gordon (in case you’re interested ;).

Pandora Radio
Train 100 radio stations to play only music you like. Choose from a century of recordings: new and old, popular and completely obscure.

Off the Deep End

Weird Al at his best. We both like this. Fun car music!

Matt, in turn, tried not to drive me crazy either. He’s into world and new-agey kind of music, like Enya and Enigma, and a few oldies from the 80’s (“oldies?”). But mostly it’s techo-dance–tunes that all sound the same. I can never remember the name of any of them. Two of my songs, followed by two of his …. well, we love each other, but that was enough musical torture for one trip.

Now, if you know me, you know how much I like to shop. That is to say, not at all. Not unless the cupboards are bare, my jeans disintegrated in the wash and my shoes are falling off my feet. But today was special, a Double Celebration. After 2 years of “Nah, I just want to work”, Matt finally decided to re-enroll in college again this fall.

Part Two of the Celebration is wonderful … and bittersweet. He turns 21 in a few days. Twenty one! My baby. A legal adult. My brain is in a state of disbelief, my heart is aching. Where did all those years go? 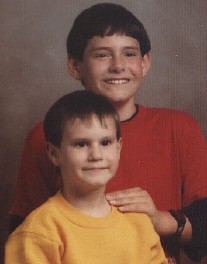 So I’m driving along, listening to him chatter about friends and work and buying textbooks, and half my mind wanders back in time, calling up a vivid memory of a little boy with silky, dark hair, a bright yellow sweatshirt, Teenage Mutant Ninja Turtle sneakers on feet that were almost too big for his body, a tiny smile starting to break thru the cloud of tears. His still-chubby hand wrapped inside mine as we walked away from the elementary school, away from that familiar world of ‘public education’. He didn’t say a word, but his eyes told me volumes. Thank you, Mom. I’m not ‘slow’, I don’t have ADD. I’m just bored. And I don’t learn things their way.

That was April, 1993, chilly, overcast and blustery. Matt was just 6 years old, almost done with first grade and we were leaving to try a new adventure: homeschooling. His 11 year old brother Adam walked alongside with this half-relieved, half disbelieving expression. Everyone felt good, a little scared, but ready to start our new adventure. Little did I know that the biggest lessons were still to come. Both of my ‘closet unschoolers’ would surprise me, leave me in the dust academically, and change my life forever. Particularly Matt.

Back in the car, I glanced over at my now 6’1″ teddy bear, marveling that this was the child who refused to read until age 10, wouldn’t open a textbook, or do a worksheet. He wouldn’t do math until age 16. Didn’t matter how much “fun” I made it. He simply wasn’t ready. Instead, he showed me that learning Science and History from baking cookies was not only normal and natural, but fun. And that learning Math (and Industrial Design concepts) while ‘just playing with Legos’ was not only possible, but logical. Invented spelling until age 14 meant nothing more than a creative mind was on the job. Slowly, gradually, he helped me stop worrying so much. He learned at his own pace, on his own schedule, with his own methods. And none of it looked like ‘school’. It looked like life.

In short, I didn’t teach him how to unschool. He taught me.

Matt interrupted these musings, to ask me what I knew about ancient religious beliefs in Mesopotamia (“which, as you probably already know Mom, is now split up into Iran, Iraq, Syria and Turkey?”) I chuckled and gave him that familiar “oh-yeah-everyone-knows-that” look. He’s the guru of Factoids. He educates himself all the time — in what he’s interested in — not in what mom thinks he should learn. Example: a few years ago he became fascinated with comparing religions. I have no idea why or where he got the inspiration, but he was intent. He studied religions on his own, for two years. Just prior to that, he went to the library, checked out armloads of books, holed up in his room for two weeks, and only came out for meals. When he finally emerged, he was triumphant. Matt had taught himself K-12 math. Addition, subtraction, multiplication, division (long division!), fractions, decimals — you name it — all the way up to Algebra. Six months later he was inventing Calculus problems just for fun. (Don’t look at me. Balancing my my checkbook is all the math I ever want to know.) And now he’s decided to major in Mathematics (!) and minor in Computer Science. (See * footnote.) That boy’s going to have quite an eclectic resume.

That man, I mean.

We pulled up to a stoplight and he asks me if I’d like to have a glass of wine with him on his birthday. He’s never tried it before and needs help picking one out. I look over at him with this wistful smile. A little bit of that bright yellow sweatshirt he loved so much still hovers in the background, a little superimposed layer of memory. His feet are bigger than ever now, a size 13W. I reach over and his big, bear paw of a hand swallows mine. It’s hard to speak with all those memories floating thru the air. I just smile again and nod.

* Update January, 2015:
Milestones was originally published July, 2007. Matt graduated from UC Denver on 12/13/14. Bachelor of Science in Mathematics. With Honors. 😀

The Living Arts School
Traditional living skills, such as food prep, cooking, knitting, gardening and weaving. Learn from apprenticeships like our founding fathers did! Rolling admission year 'round.

Colorado's Homeschool Law In A Nutshell RMEC's detailed FAQ ... in layman's terms.
The First Year of Homeschooling: It's All Greek To Me
The only way I could've been more confused was if I'd suddenly landed on Mars.
Online Virtual Academies Mislead Homeschoolers Homeschooling? Pshaw. That's not what you're doing.
↑